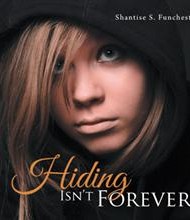 Hiding Isn’t Forever speaks to the importance of honesty and standing up for oneself through its story of a sixth grade girl who goes to great lengths to avoid a bully.

In this slim book, a new classmate verbally bullies Katy Rivera. Their teacher doesn’t know; neither does Katy’s mom, who doesn’t suspect anything is amiss when Katy claims she’s ill and stays home from school one day. Once Katy gets a taste of this reprieve, she concocts a plan to avoid school as long as possible. From sneaking back into her house and hiding in the closet to deleting voicemails about her absence, Katy pulls off an impressive ditching streak. But her friends realize what’s happened, and Katy must widen her net of lies—even giving them food poisoning to help fake a new illness herself. Katy’s lies are revealed when her teacher and mother bump into one another.

Despite a relevant premise, this book’s execution is flawed. The narrative focuses on Katy’s plots to avoid school and her manipulative behavior, rather than on her emotional state and the adversity she faces from the bully. Without exploring that context, her treatment of her family and friends feels calculating, making Katy a less sympathetic character than she might be otherwise.

Despite Katy’s fear of getting caught in her lies, the narrative also lacks a sense of stakes. Her bully’s behavior is only described — and vaguely at that — late in the book, making it difficult for readers to share Katy’s discomfort. Upon being confronted, the bully admits her faults almost immediately and with little defensiveness, further undermining Katy’s earlier decisions.

Although Hiding Isn’t Forever takes on an important topic, revisions would make it more compelling. Even as is, however, the story could serve as a platform to talk about bullying and its diverse consequences—including absenteeism.