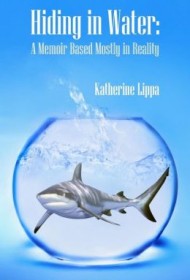 Author Katherine Lippa presents a quirky child’s-eye view of her parents, the world and the source of all calamities in this smart memoir of her youth.

With the aid of entries from a journal she kept from ages 10 to 14 while growing up in Maine in the 1980s, Lippa readily captivates the reader with her life story under the questionable guidance of parents who met in a religious cult in the ’60s and divorced when the author was four.

Lippa’s deadbeat father, Matthew, portrays himself as a prophet with psychic abilities who can move buildings with his mind. He convinces his daughter that she also can make anything happen by concentrating long and hard. Meanwhile, her mother, Martha, becomes too wrapped up in her own troubles from an impoverished life to pay much attention to Katherine, who is being harassed and abused by her older brother, Michael.

The complexities of her family dynamics leave the author to her own devices to reconcile her beliefs with reality. At age nine, Lippa’s life goals include being a writer of books, a famous actress, a good witch with real magical powers and a world savior. On the plus side, she makes early progress in acting roles. But when she uses her “powers” to wish someone dead and they then die tragically in a plane crash, Lippa starts taking the blame for subsequent world disasters, from the Challenger explosion to Chernobyl.

Hiding in Water is intelligently written, breezing along with wry humor despite the discussion of some serious issues. At times, its sassiness, wit and candor channel the talent of writer Anne Lamott. Lippa skillfully incorporates dialogue into the story and draws succinct portraits of family members, giving her book a novelistic feel.

In short, this memoir is a sterling piece of writing and a refreshing take on what shapes a childhood. It delivers a read that will delight book club members everywhere.