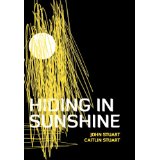 Hiding in Sunshine is a debut thriller from a father-daughter writing team that follows a family on the run.

As the novel begins, Gavin and Lisa Brinkley are living in Massachusetts with their two daughters. Gavin’s career as a high-tech inventor has afforded them an affluent lifestyle. But his work makes him and his family the target of a gang of Serbian cyber-criminals, and the FBI spirits them away into new identities and lives in Idaho.

Just as the family members become accustomed to their new circumstances, they are forced to run again, this time with no support from the government – or anyone else. After fleeing to Montana, they befriend Bruce and Maloney, an “off-gridder” couple who teach them survival skills. But threats are never far behind: from the gangsters targeting the family, Gavin’s occasional urges to join the “dark side” in the cyber wars, tension in Gavin and Lisa’s marriage and their elder daughter’s desire to go to boarding school in Concord and discover the secrets of her family’s past.

The best genre novels concern themselves with more than plot and characters; they also reflect social anxieties and aspirations. Authors John Stuart and Caitlin Stuart subtly weave the subject of American social mobility, both upward and downward, throughout the novel, giving the story great emotional resonance. The Brinkleys’ loving but complicated relationships with each other are movingly and realistically rendered, and the topical nature of the technological threat they face lends urgency to the story. Like many thrillers, Hiding in Sunshine occasionally suffers from “info dumping,” or exposition through lengthy and unrealistic passages of dialogue. Transcripts of government meetings also slow the pace, distracting from the much more interesting family dynamics.

This occasional clunkiness aside, Hiding in Sunshine is a compelling debut, and the well-drawn character of the teenage daughter could give it crossover appeal to the young adult market.