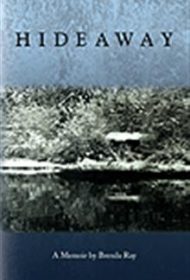 In Hideway: A Memoir, Brenda Ray recounts her family’s adventures living off the grid in Washington’s Olympic National Forest.

Ray was initially pleasantly surprised as a sixth grader when her mother told her she was taking her and her three other siblings on a trip to Lake Ozette, deep in Washington’s Olympic National Forest. But her delight quickly turned into chagrin when she realized the comforts of home in Bremerton¬¬¬ would soon be replaced permanently for the uncertainties of a new life in the wilds of the Olympic Peninsula.

Hideaway presents two strong storylines: One moves readers through the daily struggles of making a new home out of scrap lumber and navigating life in the wild. The second follows the troubled arc of the author’s love-hate relationship to her mother. Ray lets us know early on that the book, her way of trying to close that tortuous dichotomy, won’t be an easy read in that regard; Upon hearing the news of her mother’s death, she writes: “I felt no sense of loss. She had never given me any reason to miss her.”

Ray shares a portrait of a mother who detested Christmas (the “rigamorale” of preparation); who cherished solitude (“I love mankind—it’s people I can’t stand!”), and who wanted nothing better than to wall herself off from her husband—which she accomplished by moving herself and her kids to the hideaway in the woods. But she also recounts happy moments the family shared.

Other authors may be more skillful at transitioning their storyline from one chapter to the next, using a serial timeline. Ray’s book is structured more like a patchwork quilt: Some memories fall tidily into a chronological progression while others seem to fall outside of the line. But what Hideaway lacks in wordsmithing, it more than makes up for in content – offering a valuable peek into the lives of one family that chose to live outside the conventions of city life.