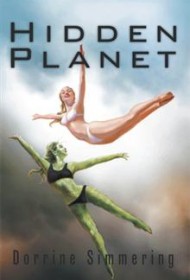 Described as a “mash up of Asimov’s parallel universes and Cartland’s historical romance stories” on the back cover, this novel is about a 19-year old Earthling who heroically travels to a backwater planet called Numinus to save its inhabitants from space pirates.

As the plot gets underway, we learn that The Federation of the Planets is trying to keep Numinus out of the hands of the pirates, who could use the remote planet as an invaluable base of operations. So while a group of mercenary aliens guard the planet from space, Earthling Darianna and her android sidekick Fletcher disguise themselves as travelers and enter the planet’s western kingdom of Talleyrand. Their mission: to bring Talleyrand’s society – one that eschews modern technology — into the industrial age.

Once in Talleyrand, however, the science fiction thread all but disappears as Darianna and Fletcher become immersed in the realm’s political and social intrigue. Darianna falls in love with Numinus hunk Christian, and Fletcher revitalizes the local economy by introducing groundbreaking concepts such as typewriters, bicycles, etc. Meanwhile, the Church, which views all advancement as evil, accuses the duo of witchcraft. And just as some discernible progress is made, a pirate spaceship crash lands on Talleyrand.

Science fiction readers will likely feel shortchanged by the plot, as the sci-fi elements are superficial at best: This is essentially a pseudo-period-romance cloaked in a thin veil of science fiction. And while romance readers will find more substance, the unnecessary glut of characters making romantic connections dilutes the power of the primary relationship between Darianna and Christian and, coupled with largely unremarkable character development, makes for a less than compelling read.

To compare this to Asimov’s work is overstating the case grandly, but the parts of the storyline involving Darianna and Christian are engaging if seen as a romance with science fiction nuances. Science fiction fans will want to steer clear, but the book may hold some interest for romance readers.