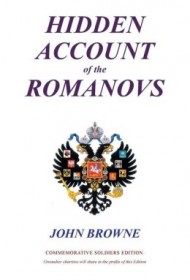 John Browne’s historical fiction novel, Hidden Account of the Romanovs, begins in 2003, when British Royal Bank employee Peregrine Coulter receives the unusual assignment of uncovering any possible heirs to an account belonging to the Romanovs, the last Imperial family of Russia. His investigation transports readers to the early 20th century, deep into WWI and the Russian Revolution.

At 827 pages, the novel is split into two volumes and takes on some of history’s most controversial and fascinating events, such as Rasputin’s assassination and the execution of the Russian Imperial family, including, of course, the possibility of a survivor.

The story follows fictional soldier Alex Fanshawe, but is full of actual events, people and historic facts. While many of these are intriguing (comparison of the Empires, why British pilots did not have parachutes), the inclusion of people’s names is excessive, chiefly in the story’s first half. During one scene at a banker’s meeting, the author lists 34 attendees’ names, taking up the equivalent of one full page.

Likewise, lengthy descriptions of uniforms, confusing decoration acronyms, and accounts of battles not essential to the plot impede the story’s flow. The author notes that he included so much information for the “added enjoyment” of people in the armed services; others will find the details overwhelming at times.

Grammatical errors are common, especially in the second part when the story develops into a romance, and are particularly jarring when the author uses several different spellings for a person’s name, even in the same paragraph.

Those who can persevere, however, will be amply rewarded with Browne’s prodigious ability to build suspense and ensnare the imagination. With meticulously detailed depictions of trench warfare, dangerous capture missions, assassinations, and daring escapes, Browne weaves captivating stories and describes with great (and sometimes gruesome) detail, life on the front and within Revolutionary Russia.

While the book could be trimmed for broader appeal, Browne ultimately succeeds in blending truth and imagination, creating an often-entertaining and credible love story within the confines of the war-torn continent that ties it all together.