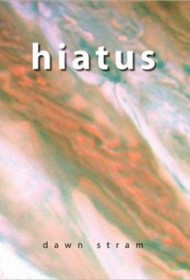 Dawn Stram’s collection of poems, Hiatus, is divided into eight sections that start at the number eight and count down to one, which gives the book a gentle feeling of suspense, a poetic countdown to something urgent that is both the end and a beginning.

Stram is in the stage of life in which, according to the book’s back cover, she has four great-grandchildren; not surprisingly, the poems are often driven by vivid memories, or fragments of memories, with vivid everyday details, as in the poem “6 years from pocatello” in which the speaker recounts how “ed bought a carton of Gauloise for helene because she / liked them, and I smoked in front of my mother / because she loved you both…”. These moments are intimate because we aren’t given an explanation about who ed or helene were; we’re just thrust into the fleeting scene.

While perhaps not as gripping as it might be, Hiatus is an ardent collection that spills over with memories and the wonder of re-discovery, as in the final poem “hello charlie,” which contains the stanza, “and last nite / searched the / closet bottoms / until the volumes / of my past / spilled out / and i began / re-reading”. This book is written for those who appreciate the sensibilities of a free-spirited woman with the wisdom of several decades under her belt.