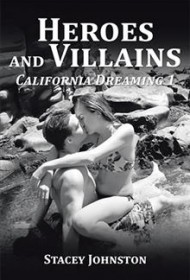 This debut novel by Australian author Stacey Johnston, comes fully loaded with steamy sex, rock n’ roll fantasies and a heated plot featuring a psychopathic killer, the U.S. witness-protection program and an intrepid CIA agent who just happens to be the father of the book’s gorgeous teenage heroine.

For Sophie Valentine, who’s 18, her family’s sudden move from sun-kissed San Diego to congested Brooklyn is sheer culture shock. But she quickly falls for a handsome, blue-eyed boy named Ben, who’s “excessively too hot for his own good”—and he for her. One complication to their romance: Ben and three friends have earlier witnessed a murder, and the killer is after them.

Unfortunately, Johnston’s plot requires much suspension of disbelief. No Brooklynite will recognize the author’s version of that borough, where a “bloke” sits on a bar stool, locals call a murderer a “miscreant,” and a teenage boy responds to a grownup’s dark warning by saying: “Your advice has been duly noted.”  (By contrast, Johnston’s graphic descriptions of Sophie and Ben having oral sex are more credible.)

Additionally, the author’s CIA-in-pursuit-of-the-killer plotline makes little sense in terms of jurisdictions; this would be the work of the FBI and local police. Readers might also question her choice to have the boys put into “witness protection” right in Brooklyn, rather than the far reaches of Idaho or elsewhere. And it’s doubtful that a father would choose to leave a room where his daughter is being held by a gunman.

Johnston fashions an uplifting finale at a concert venue that is sure to please any star struck rock fan, but her contrivances and reliance on clichés (“the grass is always greener;” “love is all about trust,” etc.) hamper reader enjoyment overall. Some careful revision to address the issues mentioned could greatly increase the book’s appeal.