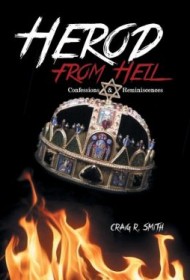 In his historical novel, Herod from Hell, Craig R. Smith explores the birth of Christianity and the most decadent years of the Roman Empire.

The novel is told from the perspective of Herod the Great, the ruler of Judea who died a year before the birth of Christ. Herod, finding himself in Hell after his soul is released from his ossuary, quickly learns that to travel upward through the levels of Hell, he must recount the truth. This truth involves not only what happened during his lifetime, but also during the lifetimes of his descendants. In order to complete his task, Herod consults with historical figures such as Cleopatra, Petronius, Savonarola, and Luther.

The book’s general tone reflects the sophisticated and somewhat sardonic attitudes of the characters involved, and the novel is infused with a wry humor. Cleopatra, for instance, wears “heart-shaped glasses with rhinestones around the frames,” and Luther has a habit of kicking people into the brimstone while shouting “You are chosen.”

The novel includes an exegesis of the Book of Revelation, a discussion of the Gnostic contributions to Christianity and so on — and is replete with footnotes and acknowledgements. It is evident that Smith, by choosing a fictional format for his well-researched presentation, is attempting to persuade the reader to his slant on history and biblical exegesis. Such a format however, precludes peer review and a balanced weighing of the work. Consequently, the reader would be well-advised to read Herod from Hell with other historical and biblical references at hand.

Overall the novel doesn’t quite succeed as fiction. While the author delivers some vivid scenes and deft characterizations, he frequently uses his characters as mouthpieces for facts and philosophical points. As a result, and readers get bogged down under the sheer weight of information.

Those who are drawn to the historical elements mentioned may find passages of interest here. Anyone seeking an engaging story, however, would do best to look elsewhere.