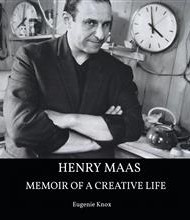 The line between memoir and scrapbook is blurred in this volume from Eugenie Knox, who chronicles the artistic life of Australian entertainer Henry Maas.

The son of Jewish emigres who fled the Nazis and settled in Melbourne’s St. Kilda district, Maas grew up in his parents’ restaurants and nightclubs and eventually became an entertainer and restaurateur in his own right. His greatest success came as a member of the Busby Berkleys, a retro song and dance act that played Europe and New York in the ’80s and ’90s. Later, he was front man for The Bachelors From Prague, a jazz fusion group that released four albums.

This memoir makes it abundantly clear that Maas had stage presence to spare and was a potent player in Melbourne’s bustling cultural scene. That said, this isn’t a true memoir so much as Knox’s love letter to a favorite entertainer. It skates along the surface, rarely offering serious insight into Henry’s emotional life. We learn that he was occasionally depressed when between gigs, and that he exorcised his restless creativity through primitive sculpture, painting and collage. He seems to have gotten married at some point, since some later photos are credited to Debra Maas and there are several pictures of his son, Merc, but this is never overtly addressed.

In a world where fan fiction is rampant, the fan memoir surely has its place. Where this book stumbles is in its need for better copyediting.  Maas’ comments about his career pop up randomly in the narrative without quotation marks, which is jarring. Sometimes they’re italicized, sometimes not. Additionally, while the book features many photos and posters, one wishes less were grainy.

Knox writes that her inspiration for the book was discovering a scrapbook from the early days of the Busby Berkleys. She has lovingly created her own scrapbook here. While many readers will wish for deeper revelations, Maas’ fans will surely overlook its flaws and appreciate this offering.