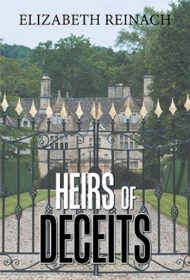 Heirs of Deceits is an historical mystery about Sir Gilbert Stanley, a politician who tries to provide for his illegitimate offspring in Victorian England.

Sir Gilbert has a history of corrupting young women and abandoning them and their children. When he encounters his illegitimate son Henry in a workhouse and finds him intellectually gifted, Sir Gilbert decides to take the boy—and two sets of sisters, also his children—into his home as his servants. He then marries a young, reluctant bride, who brings with her a strangely mannish attendant. As the marriage breaks down, a violent murder brings Sir Gilbert’s unusual household under police scrutiny.

Heirs of Deceits attempts to expose some harsh realities of Victorian life, including prostitution, illegitimacy and sexual inequality. Its large cast of characters includes an intersex/LGBTQ housekeeper, a West Indian cook with a son suffering from mental illness, a socialist activist farmer, and a Tory Prime Minister. Author Elizabeth Reinach brings this diverse cast to life from the perspective of multiple characters, but this proves an ineffective strategy. Potentially complex characters are inadequately explored, becoming little more than stereotypes or caricatures.

The story’s content is highly sexual with brief but repeated scenes of marital rape, voyeurism and under-age sex. Historical research is patchy and unconvincing; for example, fingerprint evidence is discussed during a trial in 1877; however, such evidence was not used in British courts until the turn of the century. The language used may offend some readers as the c-word appears twice and the n-word is used repeatedly.

Key mistakes further undermine the story. Characters ages are confused, and the murder trial takes place prior to the date given for the victim’s death on his tombstone. Other errors of continuity, paragraphing, grammar and spelling contribute to the sense that the story requires professional editing.

Overall, this ambitious story requires revision before it’s likely to appeal to readers.