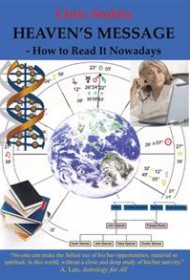 Heaven’s Message explores natal astrology: the theory that astrology and genetics are intimately connected. Consequently, the author says, in order to fully understand a person’s character, relationships, career and health, an astrologist must interpret two charts: an epoch chart based on when the person was conceived, and a birth chart based on the date, time and place the person was born.

Although the author points out that this type of astrology is quite basic, the book is anything but simple. The focus is on how to produce and interpret epoch and birth charts using the Morinus house system. While the author addresses the “budding astrologist” in the “Forward” [sic], the practical audience is more likely professional astrologers or well-educated amateurs. Dense, technical terminology – i.e.: “Similarly, if we take a Yod and find an extra planet that is bi-semisextile to those forming the sextile we see that it will also oppose the remaining planet that is quincunx to those forming the sextile” – ensures that this is not a guide accessible to laypeople.

The book begins with a scientific discussion of genetics and the birth process, along with the formation of the solar system. It offers a quick review of the astrological signs and houses, and then moves into a primer on how to produce natal charts with a computer. Using Princess Diana and Theodore Roosevelt’s natal charts as examples, the author devotes more than half of the book to how to interpret a chart for a client. The book also offers brief explanations of other areas, including prediction, horary, electional, syanstry and research.

Overall, this book is concise and well written (though containing some copyediting issues), making it a potentially useful tool for those readers already familiar with the subject who want to delve more deeply into natal astrology and its interpretation.