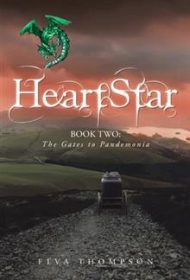 Although well written and obviously well researched, the second installment in Elva Thompson’s ambitious fantasy saga set in multiple dimensions (after 2013’s The Key Made of Air) suffers from myriad significant issues.

Featuring characters from the High Faerie, Faerie, and the Mortal realms, the novel’s storyline revolves around two sylphs who are the last remnants of the House of Air, a clan that is essential to continually energizing the plant life in the mortal world and keeping the “Green” healthy and strong. With their creators imprisoned and a powerful evil spreading across the realms, the two sylphs are forced to embark on a quest to find an invaluable token that has been stolen from their House.

The token, a key made of air, will unlock the healing power of the HeartStar. But with armies of goblins, demons, and other assorted nightmares intent on killing them, their quest quickly turns into a fight for survival.

The story’s biggest issue, from a reader’s perspective, is that fantasy fans who haven’t read the first novel will be immediately lost. There’s no attempt to explain all that transpired before. And although the storyline is briskly paced and action-packed, none of the characters are adequately described or explored, giving them a cardboard feel. That lack of emotional depth and disconnect with the characters—coupled with the confusion surrounding the events of the first novel—makes for a flat and detached reading experience. Additionally, the ending is more of a respite than a conclusion, leaving readers unsatisfied.

Fairie-powered fantasy is hugely popular—and has been for decades—with bestselling series like Seanan McGuire’s October Daye and Laurell K. Hamilton’s Merry Gentry sagas drawing audiences worldwide to the fascinating dichotomy between the fey and mortal realms. But these series are so popular because they feature fully realized, identifiable, and emotionally complex characters as well as meticulously described realms that are steeped with magic and wonder—two integral elements that this novel lacks.