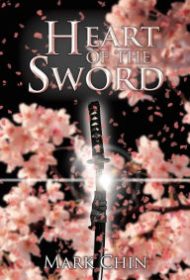 Legendary swordsman Saitou Hajime is the deadliest in the Shinsengumi special police force. He’s charged with helping the recently overthrown Tokugawa Shogunate fend off new political ideals that are anathema to old-school thinkers such as himself—including opening previously isolated Japan to Western thought and the industrialization the new empire feels is necessary.

Hajime has focused his life on the Shinsengumi mission of eliminating all evil as it’s encountered, despite the consequences—until a deadly accident brings delicate Tanagi Tokio into his life. Their marriage of convenience sparks a chain of events that changes their destinies, and Japan’s.  Hajime pursues his ferocious quest, leaving a trail of blood in his wake, and his cruel personality even affects his marriage. Seemingly meek Tokio turns out to be a true match for him and even proves a deadly, if silent, partner in his mission.

The author notes that although his players are based on actual historical figures, the book’s events unfold in a “parallel timeline” to history. He also credits the Rurouni Kenshin anime and manga series with inspiring his work.

The doorstop tome (710 pages) is chock full of characters and action, with the pace and tone alternating from heart-pounding scenes to quietly intricate moments. The main characters are rendered with depth, and readers will enjoy larger-than-life swashbuckling escapades that are common to this genre.

On the down side, some secondary and tertiary characters receive merely surface description, and certain characters use jarring, anachronistic slang. (Tokio’s young assistant, for example, drops the f-bomb frequently.) Also, while the author provides a glossary of terms, they often lack authority (as in his definition of youkan: “Some sort of pudding, I think.”)

Despite such issues, those who appreciate epic yarns will likely enjoy this book, as will fans of feudal Japan or of tales of Samurai warriors and bushido.