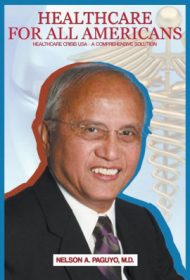 Dr. Nelson A. Paguyo’s Health Care for All Americans relays his vision for an accessible, ideal healthcare plan for all United States citizens, legal permanent residents, and refugees.

Paguyo patiently presents aspects of the US healthcare economy that could support this plan and covers topics ranging from the history of healthcare, healthcare finance, and expenditures to current healthcare policies that are not working for Americans. He also provides a historical context as well as an in-depth analysis of other countries’ national health systems.

The author’s intent is clear; he wants the U.S. healthcare system to be the best in the world. His book is well-edited and organized. Written in an academic tone, it offers a thorough analysis of the current U.S. health care system.

Unfortunately, his proposal lacks a realistic roadmap for how to make such changes within the complex, political environment that currently shrouds health care reform. Presently, Congress is unable to pass sensible resolutions to the problems inherent in the Affordable Care Act; therefore, it’s highly unlikely that a political environment would exist that could advance Paguyo’s bold proposal anywhere in the near future.

Nonetheless, his idea is intriguing. Those with a deep interest in healthcare reform should find this an original proposal to read and debate.