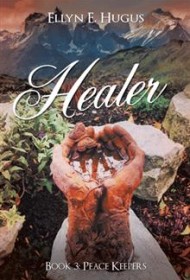 This urban fantasy takes readers on a dangerous quest from a quiet Chicago suburb to a volcanic mountaintop in southern Chile. The third in a series about people with supernatural abilities, Healer tells the first-person story of Kaya, a woman who can communicate with animals and heal them.

After a brief prologue introduces Kaya’s two supernatural siblings (fellow Peace Keepers from the previous books), the story focuses on global disasters: deadly storms and a life-threatening new disease.  Both crises may be the work of Ashlinn, another powerful supernatural sibling. To combat the strange illness, a doctor from Chile requests that Kaya bring her magical healing talents to the sick people in his area. Upon arriving there, Kaya finds Dr. Shadeed Qureishi to be caring and helpful—and highly attractive. They form a romantic bond as they work to save lives and cure the mysterious disease.

Novellas operate within severely restricted space, and this book unfortunately limits character development to make room for the complicated plot. Characterizations are often kept to two or three traits for each person. For example, we learn that Kaya enjoys practicing yoga, listening to music, and is a second-tier healer. Her love interest, Shadeed, is muscular with dark hair that’s usually tied back into a ponytail, and Erich, another doctor, is less muscular, with bright red hair and a hot temper. Readers don’t get to know these characters beyond the surface level.

The writing is generally utilitarian without much nuance. The author tends to “tell,” rather than “show” information, and little is left to the imagination. Without enough background about the characters or internal monologue to fully engage readers, the story ultimately feels incomplete.

The novel has an intriguing premise, and the plot may be compelling for fans of the first two books. But those new to the series are likely to find that this installment flounders somewhat in its implementation.