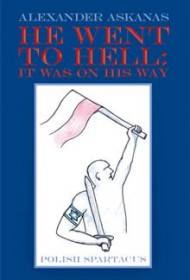 While this novel succeeds as a thriller set during WWII, it is also – and foremost – a gripping historical document about the last days of the Warsaw Ghetto and the later uprising of the Polish underground against the Nazi Occupation army.

The author, himself a survivor of the ghetto, relates the tale with harrowing immediacy. When David Apfelbaum emerges from the ashes of the burning ghetto, he finds refuge with his former high school Latin teacher, one of several courageous Polish individuals who shelter him and other Jewish survivors. Two of David’s former law school companions who are now involved in the Polish underground, called the AK, protect him. Moving from one safe house to another in a series of narrow escapes, David finally is allowed to join the AK, despite the prevailing prejudice against Jews. As an AK fighter, David joins the ill-fated insurgency against the Nazis that resulted in the annihilation of thousands of Warsaw citizens. Throughout the decade that this story chronicles, David encounters both morally upright Poles and others who are murderously anti-Semitic.

Running counter to David’s heroic story is that of his brother Stefan, who early on joined the Jewish police, men who cooperated with the Nazis in rounding up their brethren for deportation to extermination camps in order to save themselves. When Stefan resurfaces under a new identity, he betrays David, and the novel ends in a cliff-hanging scene that seems to promise a sequel.

Suspenseful action scenes and equally significant historical information propel the narrative. Particularly interesting is the infamous Hotel Polski plot, in which Jews were tricked into paying exorbitant fees for what turned out to be bogus foreign passports for Switzerland. They ended up instead in Auschwitz. Author Alexander Askanas also skillfully describes the post-war pogroms. Readers interested in the Holocaust or this period of history will find a suspenseful page-turner between these covers.