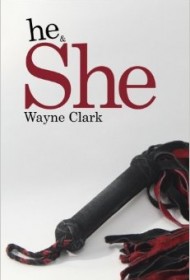 Readers could be forgiven for judging he & She by its cover. The lowercase “h” and photograph of a flogger clearly indicate that this is a story about dominance and submission in which the male is likely not in charge. While that’s true, this novel is noteworthy for being less a sexual romp than a nuanced look at desire and aging, and a stylish piece of literary fiction.

Author Wayne Clark brings K. to poignant life in this story. The protagonist drinks too much, then sobers up — and brings a similar extremism to his personal and work lives. When things are in a holding pattern, he overworks, translating faster than his job requires. “When life was flat he built pretend mountains to climb. He loved freelancing on those days when he made it to the top.”