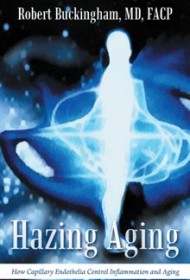 When your heart fails, your first thought is rarely about the malfunctioning of the specialized “endothelial cells,” found in your arteries and veins. Yet that’s what physician Robert Buckingham decided was a contributing factor to his own coronary artery disease – a potentially fatal 90% blockage in one of his heart’s arteries.

“Every aspect of my life would need an overhaul,” Buckingham realized after a stent was placed to open his blocked artery. Analyzing a list of his other health issues — from memory problems to arthritis, colon polyps and skin cancer -— Buckingham saw a common thread. The inflammatory process that obstructed his heart artery impacted thousands of capillary endothelial cells that help facilitate healthy exchanges between blood and major organs throughout the body.

The author begins easily enough with an explanation of how his heart disease was discovered, and how he adjusted his lifestyle to his newfound understanding of the inflammatory process. When individuals focus on the health of their endothelial cells, he explains, the aging process can be slowed or reversed. That’s because healthy cells also help moderate inflammation and provide immune support as they communicate with other cells and organs.

Unfortunately, when the author attempts to make good on his promise to translate cellular physiology and chemistry into “understandable processes,” he falls short. Those without extensive medical knowledge are likely to feel lost in the textbook-like narrative. For example, Buckingham writes this about the therapeutic benefits of vitamins C and E: “with the short-chain omega-3 alpha-lipoic acid (ALA), they form an interwoven antioxidant triangle in capillary and most end-organ cells…[and] reduce oxidative stress to cell membranes and organelles.”

While lay readers may be frustrated with this text, those with a medical background or who are willing to educate themselves with the help of the book’s extensive glossary and appendix, will benefit from Hazing Aging’s well researched and useful information.