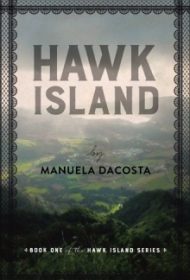 Love, loss and mayhem are the norm among villagers from a small town on Hawk Island in the middle Atlantic in this quirky novel by Manuela DaCosta.

In Two Brooks, a village “forsaken by God and man,” men, women and even priests regularly dishonor one another through rampant physical and sexual abuse and immoral conduct. Adding to the town’s troubles, a mysterious group dubbed Night Justice commits frightening, violent acts when its members perceive that someone deserves punishment.

Monsignor Inocente is trying to restore virtue, but the locals frustrate him with their unchaste and wild ways. The monsignor himself has a mysterious relationship with newly arrived and secretive lodger Antonio (dubbed Dom Carlos). Strange events and the disappearance of three young men throw village life into chaos.

This novel is fluidly penned with few typos and occasional interesting observations, such as, “She was part of that strange family that sang the words as they talked, like Brazilian people do, making simple words sound like poetry.”

Unfortunately, the plot is muddled, casting too wide a net of characters involved in too many subplot twists that never seem to be fully spelled out or resolved. For example, after several secretive and heated meetings between Dom Carlos and the monsignor, Dom Carlos tells him, “Just don’t forget, keep your side of the bargain.” Their hidden connection and that bargain are never explained.

A few supporting characters, such as sad Saul and the lovely Madelena, hold some emotional weight as drawn, but many others are flat.

The novel is labeled “Book One of the Hawk Island Series,” so perhaps details are meant to be resolved in subsequent writing. However, the story’s abrupt ending leaves no hint at anything to come. It simply stops, resulting in a frustrating and unsatisfying reading experience.

In short, the novel’s unruly menagerie of characters and scattershot approach to storytelling is unlikely to draw an enthusiastic audience.