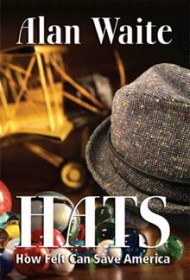 Was the Baby Boom generation the last in America to experience a life rich with relative peace, prosperity and safety, something that is now lost in modern society? Author Alan E. Waite believes so.

Despite the pessimism, he also believes future generations have a chance toward recovery if they “better understand who we were as a people, what we lack today but need so desperately, and how our lives can improve if we embraced some of the critical ideas of those years once again.” Through wise, entertaining and pointed personal examples taken from his life growing up in the once small town of Carmichael outside of Sacramento, California, in the ’50s and ’60s, Waite demonstrates how being raised with values including integrity, civility, honest, hard work, love of freedom and country and belief in Divine Providence are key to a rich life.

The “Hats” in the book title refers to those whom the “Small Ones,” or younger generation, considered the ultimate source of wisdom and authority: the “big people with felt on their tops.” In Waite’s engaging and insightful stories from his youth, he subtly demonstrates how respect, consideration and compassion for others evolved through the guidance of elders. Later, an encounter with an Auschwitz survivor helps him to understand the importance of recognizing evil. And while visiting a Gettysburg battlefield, he gets a glimpse of the true sacrifices made by the nation’s brave soldiers.

In short, this sharply penned and compelling book is likely to draw smiles and nods of recognition from other Boomers who shared the “golden age” of America of which he speaks. Should Millennials read it, they are likely to get a better idea of the “quiet magic” that is absent from today’s fast-paced world, as demonstrated in the author’s thought-provoking tales offering subtle life lessons.