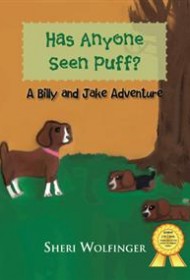 Sheri Wolfinger’s new picture book Has Anyone Seen Puff? follows the adventures of two mischievous puppies named Billy and Jake. The pups live with their mother, Tippy, on a farm owned by Mr. and Mrs. Kokomo. Tippy lived a rough life as a stray before the Kokomos found her, and she tries to instill in her sons a sense of how lucky they are.

The story focuses on one disastrous day when Jake, motivated by jealousy, decides to keep Puff, the farm’s cat, from stealing a sip of milk. The ensuing mayhem results in not only a spilled bucket of milk, but a smashed basket of eggs, a ruined blueberry pie and a very angry Tippy. The story concludes with a gentle lesson about the danger of jealousy and the importance of listening to one’s parents. Printed at the bottom of each page is a simplified version of events for younger children to read themselves.

Though generally strong, the book suffers from minor copyediting errors. (Wolfinger refers a few times to “the Kokomo’s,” incorrectly using an apostrophe to indicate a plural. This recurring mistake might confuse children just beginning to read.) Also, a digression of a few sentences about a previous adventure when Jake chased a skunk into the Kokomos’ house disrupts the story’s flow, as does the occasional awkward and/or passive sentence construction. (“Trouble continued to happen around Jake.”)

These concerns aside, readers will find that Wolfinger writes with a bouncy rhythm suited to reading aloud. The story’s moral is more subtle and realistic than those often featured in similar children’s books: rather than learning his lesson all at once, Jake begins “to listen to his mother’s talks” as he matures; this acknowledgement that positive changes take time is refreshing. Brandi Wolfinger’s soft, vibrantly colored illustrations, reminiscent of the work of Georg Hallensleben, add much appeal to the text.