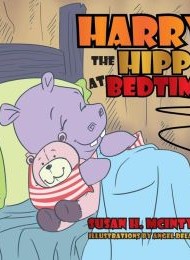 Susan H. McIntyre uses poetry to address the perennial topic of night fears in her first picture book, Harry the Hippo at Bedtime.

In this story, young hippo Harry is reluctant to go to sleep for fear of monsters under the bed. In a clever twist to a familiar tale, Harry’s mother shows him how shiny-clean teeth can “scare” monsters away — and McIntyre manages to encourage her young audience to brush their teeth and tame their fears at the same time!

Angel Dela Peña’s eye-catching illustrations, with their winning depiction of mood, particularly in the frightened Harry, and emphasis on the hippos’ prominent teeth, enhance the storyline and draw attention away from flaws in the text. Those flaws are both stylistic and technical.

In the latter category, McIntyre eschews quotation marks around dialogue and doesn’t cue readers as to who is talking, all of which proves confusing. She also employs capital letters to start every line, even those that continue a phrase and do not launch a new sentence or thought. These arrest the reader’s eye, creating an unnecessary distraction.

Stylistically, her rhyming text is hampered by some irregular rhythms and awkward wording that is used to force rhymes. For instance: “They’re afraid of the light,/ It gives them a fright./ I brushed my teeth so they gleamed/ And smiled like a bright sunbeam.”

Given McIntryre’s laudable new take on overcoming fear of imaginary nighttime monsters, it’s unfortunate that she didn’t narrate her story in prose. In this rhyming version, the issues mentioned hamper the read-aloud effort. A straightforward, carefully edited, prose version of this story might be welcome not just in children’s bedrooms, but also in pediatric dentists’ offices.