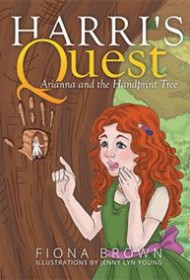 Young readers—particularly those who enjoy fantasy stories and classic tales of good and evil—will find both new and familiar layers in Harri’s Quest, a fanciful story in which trees give way to fairy realms and people turn into handbags.

Arianna, a young girl, discovers a worn handbag in the weeds near her home. “Harri” is written inside the bag, and when Arianna mentions this to her father, he tells her about his aunt Harri and the portmanteau he inherited from her. Arianna goes through the old portmanteau and discovers a note addressed to her, which explains how to enter the world of the fairies.

She slips into this world and discovers a life filled with fairy friends and focused on fairy school, where earning your wings is the ultimate accomplishment. The fairy world is not without its troubles, however, and when a goblin kidnaps the princess, Arianna and her friends join the search party.

This is a complex story, and the intricacies of Harri’s Quest make it unique. But they also inspire confusion—especially for a children’s book. Objectives and timelines are clouded, often prompting more questions than answers. For example, it turns out that Harri the handbag is Harri the aunt, but although the logistics of returning her to human form are explained, her reasons for becoming a handbag in the first place are unclear. Another curious omission is that Arianna spends a lot of time with the fairies, seemingly unconcerned about the human family she’s left behind.

Although this is a creative tale encouraging active imaginations, Harri’s Quest lacks the clarity of motive and characterization that would make it truly relatable and immersive. Precocious readers who love fantastic stories and can overlook unanswered questions will be its most likely fans.