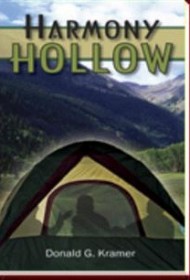 In this children’s chapter book, Ron, Tim and David spend summers in the Washington State wilderness while their fathers work for the forest service. This year, they plan to tell their parents they’re heading to a local campground and instead go explore a canyon they call “Harmony Hollow.” On the way, they encounter wild animals, an adventure that tests their heroism, and possibly Sasquatch himself.

Harmony Hollow has an engaging plot: the kids plan their trip in detail; there’s a moral conflict about lying to their parents; and exciting things happen once they get going. The story is sunk by the writing, unfortunately. The kids aren’t ever described beyond first names and ages, so it’s hard to tell them apart. Author Donald G. Kramer also makes the unusual choice to have the kids continually refer to the canyon as “the valley we call Harmony Hollow” in conversation with one another. It starts out as a distraction, then becomes increasingly bothersome with each new appearance.

Much of the story is told through dialogue between the boys, but again, the conversation tends to sound forced and unreal: “Remember, we have to climb up (the canyon wall) within another week! That really sounds like fun! That was meant to be a joke!” For the most part. all the characters sound exactly the same, with no distinctive traits to clearly identify them.

None of this dooms the book to failure. With a comprehensive edit and rewrite, the story has the potential to grab and engage readers. As it stands now, however, Harmony Hollow is a challenging read.