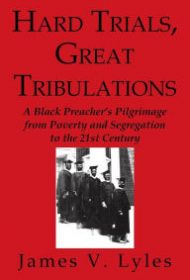 As an African-American raised in the South between the post-slavery and Civil Rights eras, James V. Lyles bears powerful witness to this tumultuous period of history in his engaging memoir. His chronological reflections, written in fluid prose, shine with his assured voice.

The fifth of seven brothers, Lyles was born in rural Arkansas on the cusp of the Depression. His parents were sharecroppers on a cotton plantation. Although his grandparents had owned the land they farmed, those farms eventually failed, lacking financial assistance available only to white farmers.

Like his father, Lyles became a preacher, attending Southern Methodist University’s Perkins School of Theology in Dallas, one of the first black students fully integrated into campus life. His graduation was the first time his parents had worshipped with whites.

He was a Memphis pastor in 1955 when news broke of Emmett Till’s murder and Rosa Parks’ arrest, launching the Civil Rights movement and leading Lyles to attend protests throughout Tennessee. As the country slowly transformed, Lyles impacted the communities he served, often “preaching to folk who had never before gotten close enough to a black person to shake hands.” By 2004, having retired twice (as pastor and hospital chaplain), Lyles became a traveling barber, a ministry of sorts he performed in nursing homes.

A professional writer and editor, Lyles’ ex-wife wrote the book’s preface, in which she tells of the five years he spent writing and revising his memoir. The diligence shows. His reminiscences are organized and grammatically flawless, yet retain his unique voice, one honed through years at the pulpit. Only one chapter near the book’s end – “Living Alone¸” pondering his solitary life – feels superfluous, but Lyles finishes strong, his final lines aptly linking his stories: “I was not lucid when I was born, and I will not be lucid when I die. Thus, I will not be surprised or disappointed with what I find. For that finding will be the joy of God’s creation.”