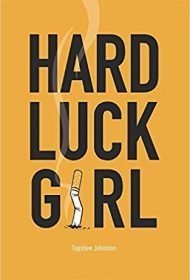 Hard Luck Girl is a fast-paced thriller set in Victoria, British Colombia, centering on a prostitute who finds her world upended when she discovers her pimp’s dead body and instead of calling the police, decides to dispose of his body.

Rose is a determined but damaged character. Her sister has died violently, and Rose has turned to prostitution to escape a dreary future cleaning houses. She’s her pimp Rod’s favorite girl and shares a room with him in a motel where he runs a string of girls.

After Rod’s death from what appears to be a drug overdose, Rose thinks she’s poised to take over Rod’s business, but with a pair of twins from a rival drug and prostitution ring on her trail, and her regular client Linden Aubrey asking difficult questions, she may have taken on more than she can handle.

Hard Luck Girl is a gritty read with strong language, sexual violence, prostitution and drug abuse. As Rose’s race to deal with Rod’s body quickly becomes a fight for her survival, the action moves briskly, and author Topshee Johnston ends every chapter on a cliff-hanger, ensuring readers turn the pages.

Despite its at-times sordid subject matter, the story has comic overtones. Rose’s ongoing struggles with Rod’s dead body humanize her character—a good thing, as Rose isn’t always a sympathetic character. Her actions are consistently motivated by self-interest, and although she describes herself “a small-town girl caught in something much bigger,” she appears callous, even in early chapters. Other characters are somewhat clichéd—the druggie prostitute, the gay friend, the seedy motel owner, the slick lawyer—but because they’re all seen through Rose’s eyes, this seems to say as much about her character as it does theirs.

Technical errors occasionally interrupt the story’s flow. Still, despite this and the difficulty readers may have empathizing with Rose, Hard Luck Girl is a generally well-written, fast-paced story thriller fans may enjoy.