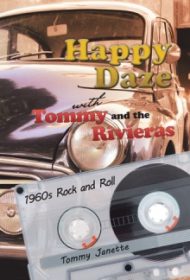 Anyone who played in a popular local band, appearing in bars in a string of towns within driving distance and opening for famous acts, could probably tell many funny, touching and outrageous stories about life in the shadows of stardom. There’s so much promising material, after all. Happy Daze with Tommy and the Rivieras is a journal of such stories about a band that played the New England club scene from 1963 through 1985.

The Rivieras, led by the author, mostly played covers of hits and opened for or backed up dozens of better-known acts, from the Beach Boys and the Chiffons to the Four Tops and Lovin’ Spoonful. The group also opened for the Doors at an infamous New Haven concert where lead singer Jim Morrison was arrested for inciting a riot. That story is the set-piece recollection of Happy Daze and makes for a fun read.

Unfortunately, the book is greatly hampered by writing issues. Tommy Janette has led an interesting life and probably tells amusing stories for hours, but he has trouble translating them to the page. Much of the book reads like tweets, with an overabundance of exclamation points. For instance, he breathlessly describes one performance: “We had two shows go great! The management loved us, we were friends with the bouncers and the bartenders, our name was all over NYC radio and we were all excited about the third show! The third show was The Temptations!” Many of the brief chapters are mere fragments that mention people and places but don’t advance the storyline.

The narrative also suffers from mistakes in grammar and misspellings, including those of famous artists. Two examples: The Four Tops’ raspy-voiced lead singer was Levi Stubbs, not “Levy,” and the famous folk-rock group was the Mamas & the Papas, not “Mommas.”

It’s a shame the book doesn’t rise to its promise, as the raw material no doubt exists for an entertaining, behind-the-scenes read.