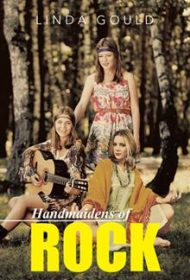 In this novel, a trio of young women cast their fate with the members of an aspiring rock band as they pursue their quest for fame and fortune in the tumultuous 1960s.

Told through the alternating points of view of Candy, Hope and Theda, the story begins when the characters are high school students, bored, restless and eager to make their mark in the world.  Candy is the sheltered daughter with dreams of becoming a journalist; Hope is the pretty one, aiming for a career in fashion, and Theda has set her sights on the theater.

The three connect romantically with high school musicians Preston, Clive and Neal, go off to college and then, on something of a lark, sign on for a university-sponsored tour of Europe that quickly changes course. There’s a visit to a famous recording studio, followed by an escape to Clive’s cousin’s estate in Scotland and an ill-conceived group wedding aimed at keeping the young men out of the Vietnam war. With plans for a rock festival sponsored by a wealthy friend with questionable political allegiances and the requisite bandmate squabbles, there’s plenty of opportunity for turmoil.

Gould’s tale is colored with details of the rock and cultural scene of the 1960s. The progression of the band – from high school dances to clubs and festivals – seems generally authentic. The novel is well edited and the plot offers its share of twists, including the final showdown with disgruntled former bandmate Brad.

On the down side, the narrative moves slowly at times, with information repeated as the point of view changes from one character to the next. Also, the characters are young and idealistic, given to petty squabbles, cattiness and jealously. While this seems true to form for their age and aspirations, it can be wearying.

Overall, the story is entertaining, if uneven, and most likely to appeal to those with a fondness for the ‘60s era and the rock culture it inspired.