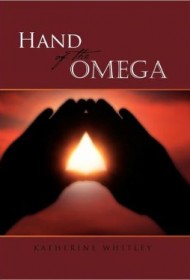 Although appealing to mainstream fiction readers, Katherine Whitley’s Society trilogy (Society Rules, Knights of Redemption, and the recently released Hand of the Omega) is a subtle fusion of many genre fiction elements: paranormal romance, allegorical fantasy, science fiction, and apocalyptic thriller. The character-driven storyline — which revolves around a quartet of thoroughly developed and endearing protagonists — examines the ongoing conflict between good and evil on both a personal and grand scale.

Hand of the Omega is the series’ concluding installment. At this point, the epic battle has reached its endgame. The Fallen’s plot to annihilate humankind using demonic assassins created to kill seemingly immortal Society members and spur a devastating surge of negative energy has been unleashed upon the world. Society members are dying, their souls poisoned, and the resulting darkness is manifesting itself as tsunamis, volcanic eruptions, etc. But can the decisions and sacrifices of a few have any significance in the Creator’s grand “game”?

The novel’s real thematic punch comes from the intimate examination of the complex relationships between the main characters: William Taylor, a special agent working for a highly classified division of Homeland Security; his wife, Angelica; his partner, Jackson (Angelica’s twin brother); and Jackson’s wife Indie (Will’s ex-wife). (Newly introduced character Gavin McGuire — a shape-shifting operative who was created by the CIA — however, all but steals the show with his irreverent attitude and antics!) It’s these characters’ existential and spiritual struggles that make this novel a powerful read.

It would be an oversight not to mention several key flaws, however. The narrative could have used a stronger edit, as it meanders in places, and the pacing suffers because of it. In addition, newcomers to the series will feel in over their heads, as the novel lacks any comprehensive backstory to clue them into past events. These both detract from the novel’s wider appeal. But readers of the previous two novels will find Hand of the Omega an entertaining and deeply edifying read.