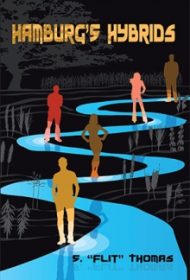 Hamburg’s Hybrids, by S. “Flit” Thomas, is a family saga with racial issues at its core.

On her daughter Bria’s wedding day, Jennifer Langley receives a document from her late father-in-law, William, describing the family’s complicated racial history. He leaves it to Jennifer to decide how to reveal this information.

The family history revolves around human breeding experiments conducted before the Civil War in Hamburg, South Carolina, by Adolph Hamburg, a specialist in plant and animal hybridization. Enamored of a pale-skinned, green-eyed slave, Adolph decides that a careful breeding program can eradicate the “seed of the Nile” from future generations. Eventually, descendants of this experiment come together in the Langley family, their servants, and their business associates.

This is rich territory, but unfortunately, the story’s flaws hinder its effectiveness. The plot is convoluted and confusing, made even more difficult by the author’s tendency to focus on the modern family’s tensions—such as son Michael’s debts, and the conflict between William’s second wife and his mistress—at the expense of what should be the central racial history.

Meanwhile, when characters muse at length—often to themselves–on their extended family histories, readers encounter long lists of names, complete with hyphens and parentheticals. For example, when Rosita Elena Hamburg-Petersen-Smyth tells William her family history, she refers to “my sister Helga (Helen) Smith (Smyth)….”

Additionally, the theme is muddied. While characters often say that human beings shouldn’t fear or hate people because they are different, Thomas chooses an odd way of showing this: by building her story around a human breeding experiment designed to eliminate those differences.

Finally, the narrative is hampered by a plethora of copyediting mistakes and awkward, stilted dialogue.

Had Thomas followed “experiment” participants down to the current day and slowly revealed character reactions to their racial histories, the story could have been an interesting examination of the impact of race. As it is, Hamburg’s Hybrids will likely have limited appeal.