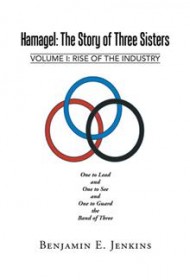 This morality tale is set in Elysian Fields, a land ruled by kings and queens, with undercurrents of greed, selfishness, and black magic.  Planned as the first in a series, the slim volume contains a roster and map explaining more than 50 different names of characters, races, and places, many of which allude to the Bible or ancient mythology.

At the heart of the story—although appearing only in early and late chapters—are three sisters intent on saving their world from the growing threat of a dark force called the “Industry.” The sisters, Hattie (the wise one), Margaret (the gifted warrior), and Ellen (the seer), endure a difficult journey to Mount Mandara on their secret mission. There, they use their various strengths to protect the people and environment from the evil Lord Daimon, who heads the Industry.

The book also pits Daimon and his corrupted army against three good-hearted misfits who have been sold into slavery: Elijah (whose circumstances seem to mirror the Biblical story of Joseph), Oleander (a young woman kidnapped by bandits), and Talos (a troubled giant). The trio quickly bonds during their brief incarceration. Eventually, good and evil factions collide, and links between several characters become apparent.

Favoring narration at the expense of dialogue, the story is marked by a preachy tone that tells readers who is good and bad and what is right and wrong, rather letting them form their own conclusions. Additionally, while the back cover notes that this is a tale for young adults, there are no clearly identified young-adult characters, and the story features violence (including waterboarding torture), sexuality and drug use that is sometimes described with detail that seems inappropriate for this audience. Stylistic errors, including spelling, passive voice, and repetition, also mar the reading experience.

This is a well-intentioned but flawed book that might appeal to those who take comfort in being told how to think about characters and events. Most readers, however, are likely to balk at this approach.