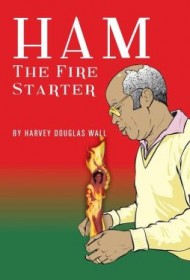 In his weighty debut novel, Harvey Douglas Wall aspires to write a Michael Crichton-like science fiction thriller based around the capabilities of the CERN Large Hadron Collider located in Geneva, Switzerland. Unfortunately, the characters’ hyper sexualized behavior is difficult to believe and the techno-thriller elements involving time travel, alternate dimensions, and genetic memory are hard to follow.

Much of the novel is narrated by an arrogant, often mean-spirited scientist named Hank Corville. His protégé is Jill Connolly Coogan, who is eager to have her husband Evan join the team doing research in Switzerland. Almost instantly, there’s a conflict. “Are you saying that you want to sleep with my wife once a month for as long as we’re on the project?” an understandably skeptical Evan asks Corville. From there, we get an entire cast of characters that hops in out of bed with each other at will, starting with Jill, who at one point declares herself to be a “slut.”

On the scientific side, the team succeeds in creating some kind of trans-dimensional tunnel between Geneva and the African nation of Burundi. This leads to Evan’s discovery that time-travelers can access their genetic memories dating 60,000 years ago, in Africa. The team also discovers that in other dimensions, doppelgangers of themselves are running around with different names but similar identities, which quickly gets confusing.

This leads to much gibberish, such as when Evan declares: “I believe our own minds can use the earth’s gravitational field like an antenna to communicate conscious as well as subconscious information from person to person as well as through space-time.” By the book’s final third, the story has degenerated into a mumbo jumbo of pseudo-science, alter egos, and odd portrayals of prehistoric life.

The book’s concept could potentially appeal to sci-fi fans who are drawn to the wildly speculative end of the genre, but the unlikely characterizations and incomprehensible plot are likely to derail all but the most adventurous readers.