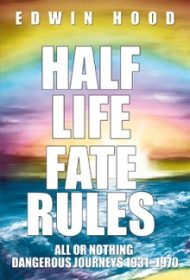 Half Life Fate Rules is the memoir of an individualist who lived by a code of “strict moral behavior” and self-reliance.

Edwin Hood grew up in Maine during the deprivations of the Great Depression and WWII.  He served in the Marines’ Easy Company in Korea and saw action on hills 812 and 749.  Later, he served on the Bennington aircraft carrier.  He was discharged as a sergeant, after having earned three battle stars, a purple heart and a “combat V” medal.

After his service, Hood became a placer miner in British Columbia, mostly along the Peace River near Hudson’s Hope.  Life was hard, and Hood survived by hunting and doing odd jobs.  Although Hood never gave up the lure of searching for gold, he eventually became a commercial salmon and halibut fisherman, and the story of his one-man trawling operation fills the book’s latter part.

Hood only relates the first 40 years of his life here, but what he covers is detailed and descriptive.  Korean War buffs will be interested in his description of battles and quotidian Marine life. And historians will be equally absorbed in his careful descriptions of towns like Hudson’s Hope and the people who lived there in the ‘50s and ‘60s.  Some of his nature descriptions are arresting (a lynx turns around on a branch “with the most minute adjustments of his feet”) and Hood also clearly describes building a mining blanket box, repairing a trawler and other tasks.

Despite the book’s informative and descriptive aspects, some readers may be stymied by its numerous typos, incomplete sentences, and repetitive passages (pages 517-526 exactly repeat pages 485-494). Hood also writes pages describing people who have little impact on his life and scant reader interest. The book could be cleaner, tauter and perhaps 100 pages shorter.

As it stands, it may appeal to some readers with an interest in history and adventure, but would need editing to garner a larger audience.