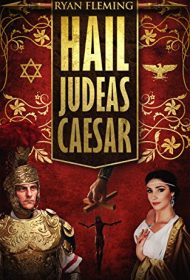 What if the genesis of the religion followed by a third of the planet was not what it is believed to be? Author Ryan Fleming answers that question in this intriguing historical novel, stripping elements of the divine from Christianity and giving it a thorough re-examination.

The novel is peopled with characters familiar to anyone with a passing knowledge of Judeo-Christian history. It opens with Pontius Pilate discovering that his next assignment is as Prefect in the backwater of Judea. Despite his doubts, he sets sail for the capital of Caesarea, knowing that what awaits him is a rebellious population insistent on following a single god. Is it even possible to consolidate these people under the banner of Rome?

Pilates’ beloved wife and helpmate Claudia accompanies him and offers as much guidance as she can, yet he soon finds that his misgivings are well-placed when his efforts to bring order are perceived as tearing at the fabric of Judean life. He quickly realizes that the local Hebrew leader will be of no help, and turns to a Judean, cunning Joseph of Arimathea, to concoct a scheme to encourage the population to respect the Roman lifestyle. They recruit another Judean, John (later known as the Baptist) and his cousin Jesus, and, with the help of cleverly placed accomplices, all goes well until Jesus is arrested. What happens next changes the course of history.

Fleming contrives a well-paced yarn. His story is engaging, and his characters stay true to themselves. Christian readers may find sacrilege in Jesus’ characterization as “slightly overweight,” egotistical, and indolent and may question Fleming’s thesis that their faith was built upon a Roman need for taxation rather than on divine revelation. In fact, there is an absence of any divinity in the Christological history. Miracles are explained away by strategically placed operatives acting at just the right times, and even Jesus’ most well-known parables and teachings are attributed to the scheme concocted by Pilate and Joseph of Arimathea.

Nonetheless, fans of alternative history will enjoy this book, and the author’s attention to detail concerning the everyday life in the era is impressive. He even includes a list of his research sources for those seeking further exploration of his rationale for this compelling revisionist tale.