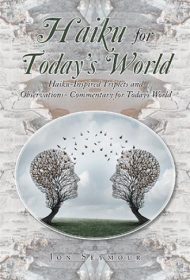 The volume is comprised of 22 sections of tercets arranged by theme. While the poems resemble classic haikus, they are intentional variations on the traditional formula— and intentionally eclectic: As Seymour notes in a Preface: “If it seems somehow incongruous to read haiku-inspired poetry on topics such as, let’s say, love, only to be confronted several pages later by a triplet on baseball, such was exactly the intent…it is my custom never to take myself too seriously. In that way, pomp does not overshadow substance.”

Indeed, Seymour’s capaciousness of interests and humor is the book’s strength. He often makes witty, incisive comments on human nature and culture in these three-line poems. For instance, in the section on hypocrisy, he poses this sharp, rhetorical question: “What fast-food executive/ Knows the flavor/ Within his company’s paper sack?” In the section on food, he playfully observes: “Nuts—nutritious noun,/ Offensive adjective,/ X-rated verb.” And in the pages devoted to baseball, he offers a memorable, sensory image: “Bronx autumn night/ Pulsating crowd and frosty breath,/ Who is not then a fan of baseball?”

Seymour’s work, however, is uneven. Many of his tercets simply restate familiar maxims and clichés, such as: “Men have known/ Many masters,/ But none so vile as money”; and “Aspire for a better lot,/ But be grateful for what/ You’ve had…and have.” Many others use antiquated language that clashes with the project’s contemporary tenor, including “E’er was a monarch so/ Stately and staunch,/ As the mighty oak?” and “Winter’s icy grip/ Doth saw/ The heart’s cockles.”

Unfortunately, the clever and engaging pieces are often buried among the less successful. Still, those willing to overlook the inconsistency will find many moments to appreciate here.