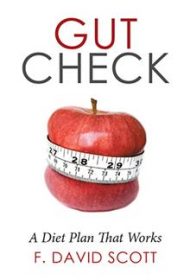 Many of us repeatedly resolve to lose weight, only to fail and try again. Author F. David Scott claims to have found a plan that helped him achieve and maintain weight loss after years of yo-yo dieting— a plan he aims to explain in his book, Gut Check: A Diet Plan That Works.

At a mere 34 pages and written in an outsize font, Gut Check is a very short read. In Chapter One (of two total chapters), Scott spends the first 18 pages describing his childhood, high school, and college weight fluctuations, as well as a work/study trip he took abroad. Chapter Two purports to describe the diet he found and stuck with, but it’s vague and confusing. A few 15-minute meetings with a nutritionist, substituting Ensure shakes for a regular lunch, and soups with frozen vegetables added for dinner are some of the ideas he mentions, but his descriptions aren’t detailed or coherent.

For example, Scott writes about the importance of drinking water, noting, “So every day or so I drink two bottles containing 16.9 ounces in the morning and two in the afternoon.” “Every day or so” lacks the precision many will desire. Additionally, he writes that eating a low sodium/low calorie soup plus steamed vegetables for dinner “would be healthy,” adding, “Also you should observe the serving size for maximum benefit.” But he doesn’t offer a suggested calorie count or other metric, except to suggest 600 mg. of sodium or less.

Scott can be congratulated for finding a diet that worked for him, but he doesn’t share enough information in Gut Check for readers to try it themselves and does not offer any scientific support for his approach. The “diet” seems tacked on as an afterthought. As a result, readers hoping to lose weight would do best to start their search elsewhere.