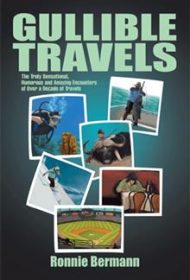 Bermann took many interesting trips, from Lake Powell to Costa Rica, but unfortunately, his accounts are largely pedestrian. With a few notable exceptions, such as his unsparingly detailed description of preparing a live pig for spit-roasting or the poverty of his accommodations in Legazpi City, Philippines, he writes colorless accounts of his adventures.

For example, while in New York for the 2008 All-Star game at Yankee Stadium, he wrote: “I took the subway for the first time ever. It was quite an experience,” but doesn’t elaborate. After a trip to the Philippines, he concluded: “Overall, it was a good trip . . . but would not do it again.” Why not isn’t clear. Conversely, readers learn too much about trip logistics: airport shuttles, itineraries, menus and routines such as the following, penned at a Dominican Republic hotel: “Went back to the room, relaxed, watched some TV, ate and drank a little, and fell asleep.”

More troublesome is his penchant for removing artifacts from sites he visited to keep as souvenirs, including: A magnetic taxi sign he wrenched from atop a cab in Santo Domingo (“while the taxi driver was sitting on the corner about fifteen yards away”; a belaying pin from the USS Constellation, a 19th century battleship docked in Baltimore; two railroad spikes that were part of a handcrafted wooden bar in Australia; and, in Honduras, a sign declaring “No guts, no glory” from a small restaurant.

Nearly a third of Bermann’s book is dedicated to his three-month, multicity tour of Major League Baseball games in 2012, preceded by a list of every player, coach and veteran whose autograph he received.

Ultimately, the book seems like a scrapbook more suited for family and friends than general readers, who are likely to find this work too personal to be engaging.

Also available in hardcover an ebook.