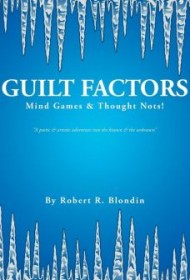 Guilt Factors is an eccentric compendium of statements, quotations, lineated poems, and visual art. In his introduction, author Robert Blondin explains, “The poetic ramblings contained herein are about life, its good days and bad days, with all its misunderstandings, mishaps, and other unfortunate happenings.”

This book is organized into four chapters. The first, “Guilt Factors,” is comprised of 20 pages of expository statements, such as, “Everything you forget is not really forgotten; it is only concealed in your subconscious.” The statements contain no imagery and, together, read as a long, disjointed lecture rather than a series of crafted poems.

The second chapter, “Historical Quotes,” is introduced this way: “…here are a few historical quotes to ponder when it comes to guilt and the workings of the mind.” All quotes are attributed to sources other than the author and are presented without author commentary.

The third chapter, “Poetry & Artworks,” is prefaced with the disclaimer that the “artwork has no bearing on poems or vice versa,” which confuses readers as to their pairing here. Familiar sentiments are often expressed in clichéd ways, as in: “Never would I ever,/ fall in love again,/ never would I ever,/ glance at your picture again,/ its [sic] hidden in a drawer,/ to be seen no more.”

The book concludes with Chapter 4, “Reader’s Participation Page,” where readers are invited to provide an “analysis” of each poem.

As might be evident from the inclusion of so many disparate elements, the collection ultimately rambles more than it coheres, and the scope of subjects is too thematically unfocused to sustain the reader’s attention. If Blondin re-imagined the poems in the third chapter as a stand-alone project, and infused them with more original imagery and fresh language, his work might have greater appeal. In its current form, however, the collection reads like a scrapbook full of scattered, private associations. As such, it’s unlikely to garner an appreciative audience.