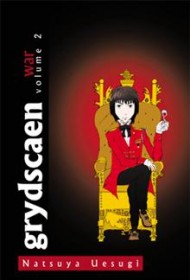 This is the fourth installment of Natsuya Uesugi’s grydscaen series, a grand-scale cyberpunk-nuanced saga set in a post-apocalyptic future that pits a tyrannical group of nation states against a much smaller coalition involved in its own civil war.

The storyline revolves largely around Ameliano “Lino” Dejarre, the psychically gifted son of the Viceroy of the smaller coalition known as Pacific Territories. Lino, a hardcore drug addict who is going through withdrawal, is caught in the middle of a looming war and desperately trying to find his place in the world. Shortly after he finds out that he has been mate-paired (essentially a marriage with psychic links) to the Emperor’s son— a relationship that carries great political significance — Lino’s life is turned upside down yet again as the Atlantea Federation and its army of inhuman albino psychics attack. After being named Sub Viceroy by his father, Lino must deal with his addiction while trying to find a way to save those he loves. Amidst the chaos of war, he embarks on a revelation-filled journey of self-discovery.

The novel’s most glaring flaw is the author’s missteps concerning the use of punctuation. Punctuation errors—specifically those regarding commas—abound and detract considerably from the narrative’s flow. Another issue is the story’s uneven pacing. The novel’s first half is briskly paced and action-packed, but the latter half slows markedly, hampered by too much dialogue; it also suffers from a completely unsatisfying ending that seems mostly a respite until the next novel.

That said, there is an undeniable coolness about this story. The cyberpunk setting is exotic and edgy, and the central characters are three-dimensional and decidedly non-stereotypical. (Lino is bisexual; other major characters are gay, and one is transgender.)

The glut of basic grammatical errors coupled with a weak ending make this an exasperating read at times. But the series shows more than a little potential, and the novel is ultimately entertaining despite its drawbacks.