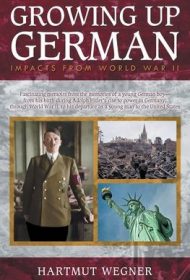 An intriguing combination of history and memoir, this story blends the horrors of war with details of the daily life of a young boy growing up in Hitler’s Germany and beyond.

Hartmut Wegner, 84, writes in a straight-forward manner as he unfolds personal experiences of growing up in Berlin during the brutal reign of Hitler. Born the same year as Hitler’s rise to power, and raised mostly by grandparents and extended family members (his parents divorced during his mother’s pregnancy with him), he faced years of sleep deprivation, times of great hunger and upheaval during the war until they could buy passage on a ship to America.

Wegner’s reporting rings true, with effective descriptions of rows of burning homes, exploding weapons and more. Especially heartbreaking for him was having to watch as three Russian soldiers broke into their apartment and repeatedly raped his 16-year-old sister right in front of him. As he relates such events, the author engages the readers’ senses: One can almost smell the putrid corpse of a suicide on the railroad track, feel the slap from his mother as she forces him to drink soup made from water and rye flour to prevent starvation.

Looking back on his life, hoping to supply a “missing piece of history,” Wegner also includes intriguing personal accounts, such as love letters written in secret code, and bold and insightful opinions (“[A]re all German people guilty of the huge atrocities committed?” he asks. “Sometimes I personally think yes.”)

The mundane title doesn’t do this book justice, and there are a few punctuation errors and questionable word order issues here and there, as well as passages that could use tighter editing, but none cause major distraction.

Reminiscent of Erich Remarque’s All Quiet on the Western Front in its depiction of the brutalities of war and the deep physical and emotional trauma it imposes, Wegner’s book informs, enlightens, and inspires. It should appeal to a wide audience.