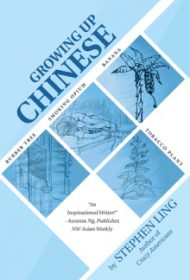 Mainland China at the start of the 20th century suffered from a fast-growing population and poor economy. Struggling peasants, therefore, were receptive to offers of free passage to work on remote rubber tree farms in Malaysia. This is where Stephen Ling spent his childhood, adopted “for my hands only” by an impoverished pig and rubber farmer in her 50s and her opium dealer husband.

Growing Up Chinese is Ling’s account of his formative years and struggle to find a better life. It also sheds light on the Chinese customs and superstitions that informed everyday life even in a village several thousand miles from their source.

Raised without books or toys, Ling hungered for the education his adoptive mother deemed unimportant. “Survival was the top priority, not education.” His mother plays the role of villain, quick to flog him with a stick for preferring play over work. Tapping rubber trees was hard, especially at 3 a.m., when his days began, and there were few rewards. The family subsisted on rice gruel, and Ling was often hungry, especially after his father left to raise another family with his mistress.

The story is most successful when Ling acts as tour guide, escorting readers inside an opium den, an arranged couple’s wedding, a Chinese New Year celebration, etc. Unfortunately, an overabundance of metaphors, similes and other literary devices becomes wearying. In a single paragraph, Ling compares “something ominous” to “a snake about to rear its head”; “news leaking slowly” to “steam escaping from a boiling pot,” and a suicide to “the sun disappearing deep into the ocean.” He also personifies death (twice) and douses “the fire of joy with cold water of death” as an “ill wind” blows through the village. Individually, such flourishes are interesting, thrown together they quickly become overwhelming.

A more straightforward writing style would better serve both the story and readers. Still, those fascinated by all things Chinese might find Ling’s book informative.