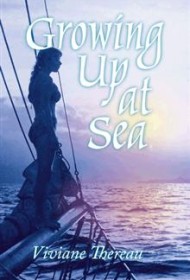 Viviane Thereau’s first 18 years were packed with more adventure than many other people experience in a lifetime.

Just weeks old, she was spirited out of France by her family, days ahead of invading Nazis. They took to the sea, sailing Caribbean and South American waters as her father built a business making and selling small figurines. Thereau survived hurricanes, a jungle kidnapping and encounters with pirates while enduring a Spartan life on the water.

Thereau details these adventures — and many more-mundane events — in Growing Up at Sea. Relating her early life in a conversational tone, almost as if she’s sitting in her living room, the events unfold in small chunks — some more interesting than others. The book would have been more powerful with fewer side stories that add little to the narrative and additional details that flesh out Thereau’s more interesting experiences. (Too often her accounts read like a travel journal: as in, “Today we went to St. Lucia, then we went to Martinique,” etc.)

A few grammatical missteps also could have been cleaned up. Another problem is Thereau’s intense focus on her conflict with her mother. Few pages go by without a denigrating remark: her mother was demanding and secretive, drank too much and physically and mentally abused the children, Viviane especially. The litany amounts to uncomfortable overkill.

At 18, Thereau meets an American — he falls from a cabin cruiser and she rescues him — and they marry. She escapes the difficult life at sea — and her mother — but then the story abruptly ends. In an epilogue, she says she and her husband moved to the United States, the marriage ended after 10 years and she struck out on her own, making a life for her and her three children. The curious reader is left asking for more.