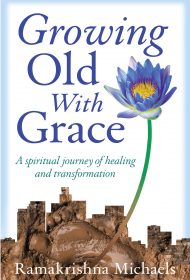 The lifecycle of the lotus flower serves as a metaphor for Ramakrishna Michaels’ compelling memoir about rising from the depths of debauchery to the heights of spiritual mastery. The book contains five sections: The Seed, Germination, The Sprout, The Bud, The Blossom.

Born in 1944 and raised in a well-to-do family, Michaels displays a prodigious talent for piano and contends with an uneasy relationship with his mother. When he leaves for college, he lets go with a vengeance, quitting piano to become “the ultimate gay party boy.” For 17 years, he “was consumed by a life fueled by copious amounts of drugs and sex,” a lifestyle that ultimately proves detrimental.

Eventually, he embarks on various routines to get healthy, including yoga. Attending an ashram of the Shambhava Yoga tradition, he encounters a holy man known as Babaji. The energy (called Shakti) emanating from the guru strikes him deeply, and something changes within; the lotus seed cracks open. He slowly commits to the practice, despite its difficulties: long hours of meditation, often-tedious works of seva—tasks of devoted service to the guru, such as sorting through beans to pick out the rocks.

The memoir’s heart is Michaels’ devotion to Babaji, a man so charismatic, the author writes, that upon first encounter, “his entrance almost took my breath away.” Babaji eventually urged him to write the book, giving him the title. “Growing Old with Grace!,” Michaels writes. “I knew immediately this book would not be about gracefully mastering the physical changes of aging, but rather would be a memoir of growing old with the guru’s grace…the grace of consciousness.”

Michaels produced this book after 13 years of commitment to the practice. His writing flows effortlessly, punctuated with intelligence and humor. And although the author writes glowingly of the Shakti he receives from his guru, he never proselytizes; the prose speaks for itself.

The result is an important contribution to the rank of spiritual memoirs, especially those concerning yoga practice.