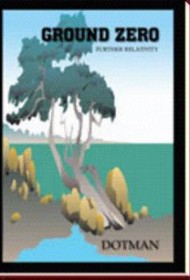 In his book Ground Zero: Further Relativity, Nigerian author Dotman offers answers to four broad questions: “Who are we?”; “Why are we here?”; “Why is the universe created?”; and “Where is there perfection in creation?” To cover this range, the author interprets the Bible, mixes in a New Age-inflected interpretation of modern science, adds a dose of world history and a bit of self-help.

The tone is prophetic. The author makes complex claims about human beings, the Supreme Being, the Higgs Boson particle, even the cosmos itself, without any attempt at defining terms, justifying his findings, or acknowledging competing assertions. Truths are dispensed from a place of absolute authority, whatever the nature or scope of the topic at hand.

The book resembles an ancient Gnostic text more than any modern literary genre. It is akin to Philip K. Dick’s exegesis, a text informed by Dick’s mystical experiences and quoted liberally in his novel Valis. It also recalls Gurdjieff’s Beelzebub’s Tales to His Grandson, in that it lards critical jabs at contemporary society into its mysticism.

As an esoteric text, Ground Zero makes a distinction between the benighted masses and a potentially self-realized few. It offers access to secret knowledge encoded in ancient mythologies, as well as savoir-faire in everyday life. Since decency shows through the author’s work, for instance in his simple admonitions to a healthy diet and mental hygiene, and in his concern for social justice, one expects that Dotman’s gnostic elite is beneficent.

The book contains countless spelling and grammatical mistakes, as well as unintentionally funny malapropisms that make it hard going. To readers who grant authority to this text, it will appear, despite its flaws, as an answer to persistent questions and eminently practicable. More cautious and circumspect readers, however, are unlikely to be convinced.