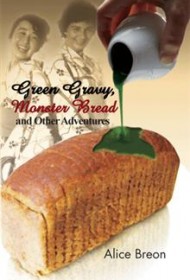 Spanning 25 years, from the author’s coming of age in Chicago during World War II to life in Japan as a mother of four in the ’50s and ’60s, Alice Breon’s stories about her life are rich in description (and photographs), poignant and humorous.

Married to a career Air Force officer, Alice found that her life was frequently uprooted as the couple moved from one city to the next. But through sheer resolve, she managed to meet the challenges of raising a family of four. In 1958, her husband Byron received orders to go to Japan. Alice and her family adapted well to the vastly unfamiliar customs of a new culture. She became close friends with a Japanese dance instructor who taught her the art of dance and convinced her that she could become a teacher herself. Inspired by the elegant customs of the Japanese culture, Alice quickly immersed herself in the language and traditional dress; her housemaid, Chiyo, even offered to give up her pay so that Alice could buy a silk kimono. Years later, Alice became the first foreigner in Japan ever to teach Japanese dance.

Green Gravy is an endearing treasure of vignettes describing Alice’s departure from the stereotypical role of women in her generation. Alice proved to be a courageous and enduring woman who, despite the unexpected vagaries of life, dared to exercise her creativity and passion to become what she longed to be–a dancer. Her stories are sure to inspire other women to follow their bliss.