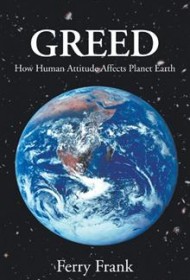 Ferry Frank’s book on greed purports to explain how mankind’s behavior is hostile to life and that only by eliminating greed can earth be preserved for future generations. For mankind to do so, he says people must respect “the universal laws to achieve maximum entropy.”

Beginning with the time of Adam and Eve, Frank makes a rapid run through many historical eras and situations related to people’s greed, such as the continued quest for gold and copper and employing slave labor for higher gain. He touches on people’s desire to enhance their personalities by acquiring yachts, high fashion, piercings and tattoos, and then criticizes the banking industry, the motives of selfish politicians, and the industrial revolution’s destructive impact on the environment.

Frank brings up some interesting points in regard to greed, but he fails to give personal credentials or cite sources for his facts and makes some dubious judgment calls, such as blaming the “unknown illness” of King of Belgium Leopold II for gradually changing his mind “into something animal like,” which left him incapable of seeing “the difference between humans and animals; between right and wrong.”

While Frank employs some faulty word usage throughout, the book’s biggest problem is that it sends out far too many loose and confusing threads, giving everything short shrift as he rushes from subject to subject. For example, he makes brief mention of Europe’s four centuries of terrorism, talks about someone named “Big Mouth,” who controls the masses with the help of his loyal “Simple Mind” and brings up what he considers a solid relationship between Jesus being crucified at age 33 and how 33% is, “surprisingly enough,” the highest efficiency combustion engines can attain.

In short, Greed is more baffling than informative and closes with no clear conclusions. Thus, it likely will have little appeal to most readers.