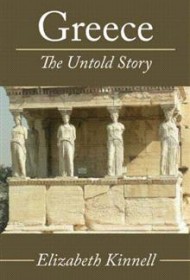 In Greece: The Untold Story, author Elizabeth Kinnell recounts the tale of her time teaching in Greece, the “ land of olives, feta cheese, and eternal sunshine!” Kinnell, a New Zealander, had taught English to Chinese students in Auckland, but she had a deep desire to travel. So when she had the opportunity to take a teaching course in Corinth, Greece, with the promise of employment there afterwards, she jumped at the chance.

Kinnell considers her new job in Greece an adventure, and she makes the most out of her time abroad by recording the details of her daily life. She writes her narrative as a series of journal entries dated from July 3, 2006 to June 11, 2007, beginning with her plane journey to Athens and ending with her return home.

In between, Kinnell travels during her breaks, reads books, sends postcards, stays current on international news, and becomes a student of Greek culture as much as she is a teacher. From her teaching post in the ancient city of Kardista, which Kinnell describes as a “city of rather shabby modern buildings, a sprawling concrete mishmash,” she encounters child beggars at the bus station and women in her classes who embrace surprisingly traditional roles.

Despite her exposure to a new place and new ideas, Kinnell’s journal entries offer repeated mundane details, such as the time at which she wakes and what food she eats for her daily meals. She also often mentions the names of people in her entries without offering contextual clues about the history of these relationships. Even though Kinnell lives and teaches in Greece, her writing rarely delves deeply into the cultural issues that surround her. Instead, she primarily relates the facts of her existence and leaves the reader to forge deeper connections.

The result is a book that reads as a catalog of the author’s experiences and isn’t likely to engage those who prefer more thought-provoking or narrative-driven fare.