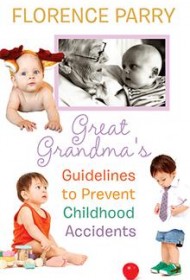 After finishing this book, readers may well wonder how anyone survives childhood, such is the minefield of potential mishaps awaiting youngsters at almost every turn. Florence Parry, a great-grandmother who grew up in England in the 1930s and emigrated to Australia in 1968, draws upon years working in health, safety and accident prevention to identify scores of dangers and offer sound advice to parents and caregivers about recognizing and avoiding these risks.

Parry paints a grim picture from her adopted country, noting that about 250 children die annually in accidents and another 58,000 are hospitalized; that doesn’t include kids treated as outpatients or by their own doctors. Her goal is to trim such somber statistics. Though she focuses on the major dangers, including water, fire, roads and driveways, no unguarded exit or carelessly stored cleaning product escapes Parry’s attention. She also has a sharp eye for unlikely hazards — the dog’s water bowl, burning water from a garden hose left in the hot sun — and includes a detailed, 26-page chapter on first aid.

American readers should be warned that sometimes Parry writes about dangers specific to Australia, such as certain poisonous plants, spiders and snakes. More significantly, she makes no mention of children and firearms. Perhaps this does not rank as a looming issue in Australia, but American parents might be concerned by such a glaring omission.

Another drawback is Parry’s liberal use of old-fashioned illustrations, combined with a reliance on research studies and media reports from the 1970s — and even the ’50s and ’60s – that give the book a slightly dated feel.

Balancing that, however, Parry encourages readers to stay current on safety issues, since “expert advice,” even on critical topics like CPR and baby’s sleeping position, keeps changing. That’s a wise way to supplement this childcare reference, which is, overall, a thoughtful and valuable resource for those helping children navigate the vulnerable years from birth to age 14.