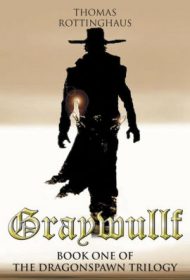 A harried chase across a desolate landscape and a face-off between two desperate adversaries opens an ambitious, sprawling fantasy epic in Graywullf, the first in Thomas Rottinghaus’ Dragonspawn Trilogy.

As the story begins, Lynch, a 500-year-old dark Wizard flees across a frozen waste as a character known initially as “The Man in Gray” pursues him, toting a gun and dark magic of his own. That pursuer, it turns out, is a magii’ri, “the race of Warriors and Wizards chosen by the gods themselves to uphold their laws.” This particular magii’ri is Ned Roark, a mercenary sent after Lynch by King Elander. While his pursuit of the Dark Wizard is hardly successful, it sets the tone and sparks the action in the World, Rottinghaus’ expansive fantasy universe.

Roark’s fellow magii’ri, headed by Lorn Graywulff, eventually stumble upon Lynch, who promises the mercenaries a tempting reward in return for letting him heal. The Wizard will rid the World of a monstrous race of flying monsters, he insists, even as he offers Graywulff precious intel about the political state of the country the magii’ri had to leave two years before. The band of heroes dedicated to upholding the law must decide whether to trust the ancient sorcerer with a sullied past.

The influences on Rottinghaus’ imagined world are obvious: The magii’ri bear an uncanny resemblance to the Gunslingers of Stephen King’s The Dark Tower series, and the World’s assemblage of magic and monsters owe a debt to J.R.R. Tolkien. Even so, Rottinghaus incorporates these nods to the masters with his own singular style and focus. The story touts enough action, character development and detail to distinguish itself, and Rottinghaus’ fast-paced voice offers an easy entry into a complicated world.

The author’s foray into the genre isn’t groundbreaking, and the text could stand some polish, but there’s plenty of earnestness and raw narrative skill here to win over fantasy fans and keep them invested for the next book.